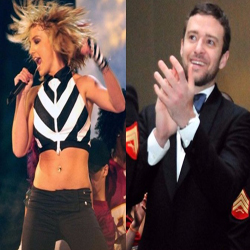 [Raaz] The denim-sporting duo of the 2000’s could be making a comeback 14 years after their split in 2002. We’re all aware that Justin Timberlake never really quite got over the “Toxic” artist as he made several references to her in his lyrics and interviews over the years.

Well, in a recent interview with Britney Spears, it might all be water under the bridge.

In response to being asked which artists she would like to collaborate with next, she said:

Point to be noted: “Justin Timberlake is very good.”

BUT, that’s not all. Justin was just as excited as we were to hear of this news.

Justin – most likely doing back-flips in his mind when E! News informed him – responded with:

“She did? Sure! Absolutely, absolutely.”

We’ll take that as a yes. No doubt, all us 90’s kids are looking forward to this collaboration.