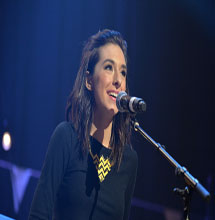 [Raaz] Six months after Christina Grimmie’s tragic death, her family is suing the Orlando Venue where she was brutally shot and killed.

Kevin Loibl, Grimmie’s killer, entered the venue with “two handguns, two magazines, and hunting knife. There were no metal detectors onsite, nor were attendees searched beyond cursory bag checks, according to the lawsuit,” explains MTV.

According to the lawsuit filed on Tuesday, Grimmie’s family claims that the “death of Christina was caused by the negligent and culpable conduct of the defendants who failed to provide adequate security measures to protect Christina at the Plaza Live Theater on June 10, 2016.” Only “superficial bag checks” were performed.

The wrongful death lawsuit, filed on Tuesday, claims that the venue “failed to take adequate security measures to ensure the safety of the performers and the attendees at the concert venue.”

Her family wishes to present the case before a jury. No trial date has been set up yet.