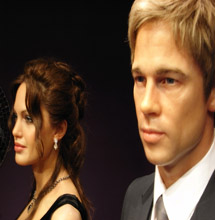 [Raaz] How long does it take to get over Angelina Jolie? Kate Hudson.

Oh, you know. Brad Pitt’s new girl. She’s already talking about his nasty living habits: from leaving the bathroom door open when he takes a dump to just being messy as hell. But, her brother Oliver isn’t having any of it.

Oliver claims that Pitt instigated a rift between him and his brother Wyatt. To top things off, Pitt apparently lost Oliver’s youngest at the Santa Monica Pier. It doesn’t stop there. Pitt’s charm has the Hudson mom bewitched, too. She’s been wearing “little nighties” around the house throughout the day.

One would think that out of EVERYTHING, Pitt losing Kate’s nephew would be the ultimate deal breaker. But, she doesn’t seem to be bothered.

Why? Because this “romance” is JUST A RUMOR! HA! The real truth is HERE.