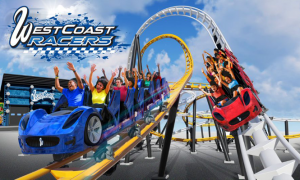 Buckle up for West Coast Racers at Six Flags Magic Mountain, one of the best rides to ever come out of West Coast Customs, now open at the Thrill Capital of the World!
Find your thrill on the world’s first single-track quadruple launch racing coaster, West Coast Racers, featuring two side-by-side tracks with four individual high-speed launches, high-banked turns, and an immersive “pit stop” designed in partnership with World Famous West Coast Customs.
Race into the New Year at Six Flags on West Coast Racers, located in The Underground, a new LA-centric urban-themed area featuring new dining, games and retail experiences.
Start your engines because we have your chance to win your way in FREE!
Listen to the Snacks Show this week from 10am till 3pm and Afternoons with Drewski from 3pm till 7pm to win on air
Or
Become a VIP in The Hits Club HERE for more shots to win!

Not a winner? You can still get the best deals on tickets, Season Passes, and Memberships when you visit sixflags.com